“Snoring ‘can raise cancer risk five-fold’”, according to The Daily Telegraph. Its story 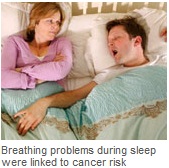 reported that scientists believe low blood oxygen levels seen in some snorers may encourage the growth of tumours, and that stopping snoring could help people fight cancer.
The news is based on a long-running US study that followed more than 1,500 people for 22 years, looking at whether their breathing patterns during sleep bore any relation to their risk of dying of cancer. Rather than looking at snoring alone, the research assessed “sleep-disordered breathing”, a condition where a person has repeated complete or partial obstructions of their airway during sleep (called apnoeas or hypopnoeas), which are linked with snoring. The researchers found that participants with severe sleep-disordered breathing showed a significantly higher risk of dying of cancer than those with normal sleep breathing. People with less severe sleep-disordered breathing had no significantly increased risk of dying of cancer.
This study on its own does not prove that sleep-disordered breathing directly causes cancer death. Only 50 people in this study died from cancer, and firm conclusions cannot be drawn based on this relatively small number of events. The relationship may also be due to other factors linked to both cancer and breathing problems during sleep, although the researchers did try to take some of these into account, such as obesity. Ultimately, more studies will be needed to determine whether this finding holds true in larger groups of people.

Where did the story come from?

The study was carried out by researchers from the University of Wisconsin and the University of Barcelona, and was funded by the US National Institutes of Health (NIH) and Spanish Ministry of Economy and Competitiveness. The study was published in the peer-reviewed American Journal of Respiratory and Critical Care Medicine.
This story was reported in The Daily Telegraph, Metro and Mail on Sunday. The newspapers tended to report the study broadly accurately, but uncritically. It should be noted that sleep apnoea and disrupted breathing during sleep are distinct problems from simply snoring, although snoring can be one of the symptoms of these problems.

What kind of research was this?

This was a cohort study looking at whether there was a link between disordered breathing during sleep and cancer death. A person with the condition “sleep-disordered breathing” (SDB) has recurring episodes of either total or partial obstruction of their upper airway while sleeping. This can lead to intermittently low blood oxygen levels, disrupted sleep and snoring. Obesity is a major risk factor for SDB and SDB is associated with an increased risk of cardiovascular problems. However, whether or not SDB is linked with cancer has not yet been studied in humans. The researchers say that animal studies have found that intermittently low oxygen levels in the blood can help tumours to grow.
A cohort study is the best way to assess this link in humans, but to prove that the link is causal would require the accumulation of a great deal of supporting evidence from different studies.

What did the research involve?

The researchers looked at data collected from the Wisconsin Sleep Cohort study. This featured 1,522 adults whose sleep was thoroughly monitored in a sleep laboratory, and who were then followed up for 22 years. The researchers looked at whether those with sleep-disordered breathing (SDB) were more likely to die from cancer than those without.
The researchers categorised people as having normal sleep breathing, mild SDB, moderate SDB or severe SDB based on their score on a standard scale called the “apnoea-hypopnea index” (AHI). This score is calculated based on the average number of times per hour of sleep that a person’s nasal and oral airflow stopped for 10 seconds or more (apnoea), or how many times they have a detectable reduction in breathing and blood oxygen levels (hypopnea). Participants who reported using a device to treat apnoea (a “continuous positive airway pressure” (CPAP) machine) were considered to have severe SDB. A CPAP machine blows air into a sleeper’s airways through a special facemask, preserving the flow of air into the lungs.
The researchers also asked people about severe daytime sleepiness, their alcohol consumption, smoking habits, general health, physical activity and whether they had been diagnosed by a doctor as having diabetes or sleep apnoea. Each participant’s body mass index (BMI) was calculated at the start of the study.
Any deaths were identified from national and state records. The researchers then analysed whether deaths from cancer were more common among those with SDB than those without the condition. They took into account factors such as age, gender, BMI and smoking, all of which could affect cancer risk.

What were the basic results?

How did the researchers interpret the results?

The researchers concluded that their findings suggested that “sleep-disordered breathing” is associated with higher levels of cancer death. They said that as this is the first study to report such an association, more studies are needed to confirm their findings.

Please complete the form below to contact us.
We try our best to get back to you as soon as possible,
as it is our priority to ensure great dental health.

Your browser is out-of-date!

Update your browser to view this website correctly.Update my browser now

Your browser is out-of-date!

Update your browser to view this website correctly.Update my browser now